The Failure of Our Successes

Early this morning, unable to sleep and channel surfing, I stumbled upon a Congressional subcommittee hearing on Afghanistan Reconstruction on C Span. It was particularly interesting since I spent the greater part of nine years in Afghanistan, from 2003 to 2012, working on reconstruction related programs funded by the United States Agency for International Development, or USAID. The hearing featured the testimony of both the General Accounting Office (GAO) and the Special Inspector General for Afghanistan (SIGAR). Statements and questions followed a predictable path as Representatives of both parties sought to unravel the great complexity that is America’s longest war to date and its efforts to build and stabilize a country mired in conflict, corruption and, dare we say it, incompetence.

Nothing new here. Topics like rampant corruption in Afghanistan and the appalling price tag for US involvement, that has at best produced negligible results, are becoming more and more common. In fact, this just morning, CBS News is running with a story of roughly four million dollars worth of inflatable boats, now stored in a Virginia warehouse, purchased by the US Military for, and I quote, “the Afghan national police to patrol a key river separating Afghanistan from Uzbekistan”. Hhmm. Here I thought the big problem was on the Pakistani border.

Yet, I cannot help going back to a small, almost insignificant, statement made by Mr. John Sopko, the Special Inspector General for Afghanistan Reconstruction to that Congressional subcommittee. When asked why there is no estimate, much less accurate figure, of the percentage of wasted of the 103.2 billion dollars the US has spent in Afghanistan to date, Mr. Sopko stated that there was difficulty getting accurate metrics by which to compile such a figure. He then added that success stories were often used as another way to measure progress in Afghanistan. Hhmm.

I am familiar with these success stories. Toward the end of my tenure in Afghanistan I was even ordered to write some. They were an endless litany of the great work the US was doing to better the lives of ordinary Afghans, filled with touching tales of poor villagers given goats and wells and walls around their schools. Smiling faces of children and old people in native Afghan dress accompanied these little tomes, which ostensibly confirmed that the US was doing a great job. The problem was that it just wasn’t so, and the only people being fooled by it all were the American people and their government. Anecdote and what was worse, inaccurate anecdote, became the gauge by which we measured what was going on in Afghanistan. It was a bubble that would inevitably burst. In fact, it is bursting now.

What is perhaps the saddest part of all of this is that while we were spending money like drunken sailors on Afghanistan and patting ourselves on the back for all our good work, the “insurgents”, as we call them, were quietly setting about to convince the Afghans, especially those in the rural areas where the real fight was going on, that the US was only there to exploit their country for our own imperialist aims. So, while we congratulated ourselves with our successes, communicating among ourselves and not to the Afghan people, the whole thing went south.

And now we must pay for it all.

Mary Ann Callahanhttps://callahanspen.com
Mary Ann Callahan worked in Afghanistan from 2003-2012, living for a large portion of that time independently among Afghans, in Afghan neighborhoods and connecting to the local population on a personal as well as official level.

Want to Win in Afghanistan? Get the Afghans to Do It 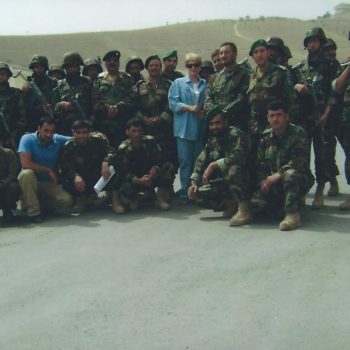